Jesus, being God, knew what was about to happen to Him. Being man, He knew He was going to feel the whip on His back. He knew He would feel the beard being pulled from His face. He knew He would feel the nails being pounded into His hands. He would not escape the pain and the humiliation. In the Garden of Gethsemane, Jesus knew what was going to happen to Him. His spirit was willing to do what God wanted Him to do, but His flesh was weak and wanted to escape the agony and the torture He was about to endure. Jesus faced the same battle that Adam faced—whether to follow His will or the will of the Father. O My Father, if it is possible, let this cup pass from Me; nevertheless, not as I will, but as You will. (Matthew 26:39) The Bible says Jesus got up from praying, went to speak to His disciples, came back to His place of prayer, and prayed the same prayer a second and a third time. (See Matthew 26:40–44.) There was a struggle going on inside Jesus—the will of the Father versus the will of the man. Then an angel appeared to Him from heaven, strengthening Him. And being in agony, He prayed more earnestly. Then His sweat became like great drops of blood falling down to the ground. When He rose up from prayer, and had come to His disciples, He found them sleeping from sorrow. Then He said to them, “Why do you sleep? Rise and pray, lest you enter into temptation.” (Luke 22:43–46) This is how Jesus shed His blood in the Garden. Medical doctors confirm that at times of intense fear or agony, a person’s blood vessels can literally break beneath the skin, and blood will begin to come out of his pores like sweat.Out of Jesus’ pores came sweat and blood because of the anxiety, the fear, and the turmoil He was experiencing. Why is this significant? We must keep in mind that we’ve been redeemed by the blood. The first Adam surrendered our willpower to Satan. The second Adam, Jesus, redeemed our willpower by saying, “Father, not My will, but Thy will,” and sweating great drops of blood. This is where we gain back our willpower to overcome Jesus knew what was going to happen to Him. His spirit and His flesh were battling, but Jesus won the victory, When Jesus submitted to the will of the Father. Jesus won the battle, broke the curse, redeemed us, and gave us back our willpower. The word “overcame” in Revelation 12:11 means “conquered,” “prevailed,” and “got the victory.”

Jesus Christ shed His blood to cut a New Covenant with His creation.
To forever bridge the divide of sin that had put a chasm between man and God, Jesus initiated a New Covenant that was prophesied by Jeremiah. “Behold, days are coming” declares the Lord, “when I will make a new covenant with the house of Israel and with the house of Judah…I will put My law within them and on their heart I will write it; and I will be their God, and they shall be My people”
(Jeremiah 31:31-33 NASB).
After Jesus’ blood was spilled for the New Covenant, we became not only heirs of Abraham, but also co-heirs with Christ.
We now today share in the inheritance of Jesus.
So then let no one boast in men. For all things belong to you, whether Paul or Apollos or Cephas or the world or life or death or things present or things to come; all things belong to you, and you belong to Christ; and Christ belongs belongs to God (1 Corinthians 3:21-23 NASB). What Jesus did for all of mankind on the cross was unconditional. He will never go back or change His mind. Accessing the fullness of the blessing of this covenant, though, is our choice entirely. When we take Communion, we are reminding ourselves of His sacrifice and the personal, unprecedented ways this New Covenant affects every area of our lives. “…He took the cup after they had eaten, saying, “This cup which is poured out for you is the new covenant in My blood” (Luke 22:20 NASB). The blood that was shed was a covenant promise for all of eternity. Nothing would be the same. The blood of Jesus paid for everything. It washed us white as snow, so we could enter the presence of the Lord without an intermediary and without fear. The blood of Jesus gave us freedom and authority. Hell has been defeated for all eternity.
And now we get to boldly release Heaven on earth. Jesus has given us a tool.

SUPERNATURAL
MIRACULOUS POWER OF THE WONDER WORKING BLOOD OF JESUS 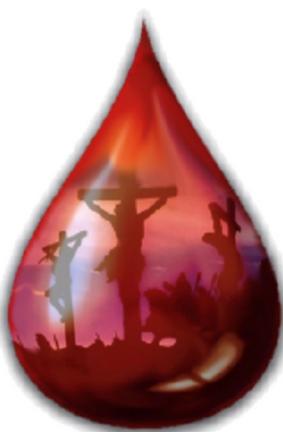 Jesus saith unto him, I am the way, and the truth, and the life: no one cometh unto the Father, buy by me.

“I am the way and the truth and the life,” says the Lord Jesus.

Our power comes from knowing His Son and being Filled with God's Own Holy Spirit.

All that God gives to us is His Son, not a lot of things.

The Answer to every question lies in knowing God’s Son. The Word  Jesus says, “I am the way.” This way may also mean to put it simply Jesus is saying I AM the method.

Jesus is the way by which we come to God as well as the method by which to reach God.

Having Jesus, we have the way; and by possessing Jesus we have the method by which to reach God.

Being Made by God

A ​God Made Man

A God Made Women

Made Free from Sin,

and the end everlasting life.